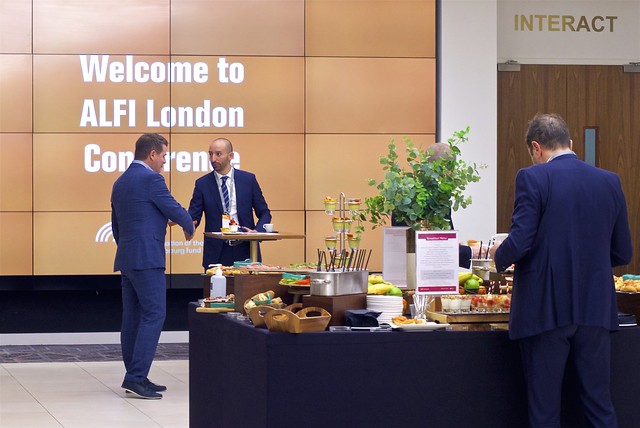 After a gap of two years brought on by the pandemic, the ALFI London Conference once again took to the stage in the City of London, to highlight the connect between Europe’s biggest centre for management of assets by AUM, London, with its biggest domicile for investment funds by AUM, Luxembourg.

Reflecting the reach of the hybrid event, more than 700 attendees were present when ALFI chairperson Corinne Lamesch and Chris Cummings, chief executive of the Investment Association, led off by jointly outlining the reasons why London and Luxembourg remain in many respects tightly connected despite the pandemic and despite post Brexit overhang of regulatory divergence. “Introducing friction introduces costs and stops us getting on with what matters,” noted Cummings.

Both associations are keen to ensure equivalent standards on ESG and sustainability, where the trend in net inflows to relevant funds has increased sharply over the past couple of years. Another is long term savings, where the ELTIF (EU) and LTAF (UK) respectively could give a boost to defined contribution markets, and help direct capital towards meeting climate and social goals. Both are keen to see relationships build between their respective regulators, including efforts to reduce greenwashing.

“In terms of how we measure sustainable funds and access better data, from the European perspective we are going in the right direction,” said Lamesch.

The keynote from H.E. Pierre Gramegna, Luxembourg Minister of Finance, ditto stressed the relationship and its future based on evolving sustainable finance.

Following on the industry digitalisation theme mentioned by Lamesch and Cummings, he noted the pandemic had both stress-tested but also confirmed Luxembourg’s ability to support teleworking in the financial sector. However, it had also proved climate sceptics wrong, and lent weight to the EU’s use of the phrase ‘climate crisis’ rather than climate change. That crisis, coupled with digitalisation, has set the scene for a potentially very different raison d’être for asset management and investment funds: “We can only tackle the climate crisis if digitalisation of the economy accelerates.”

Sustainability is no longer a veneer, but it needs data to make it happen.

The CSSF is engaged in digitalisation projects that could change how data and intelligence is gathered and processed, as well as the central registration of funds. The FCA is hiring more financial data analysts, to improve its insight into consumer issues and improve reaction to emerging market trends.

Elsewise, the near-term key topics for the FCA include ESG, value for money, and liquidity management, and for the CSSF, AIFMD changes and liquidity also.

The industry too is looking at life beyond COP26 and the tests against claiming success on the 1.5 °C target, explained Sherry Madera, Chief Industry & Government Affairs Officer, Refinitiv.

With TCFD requirements coming on stream, data underpinning the EU Taxonomy mostly does not exist. Add to that an estimated 42 different Taxonomies globally, and the scale of the data quality challenge becomes apparent. “Data is the solution, not the problem, but we all need a voice in that,” she stressed.

Maintaining asset management relevance amid the transition drove the call from Peter Harrison, Group Chief Executive, Schroders, when he suggested that the industry was facing “peak mutual fund”, as investors turned to other solutions.

“The theme of sustainability is a key one for the industry, alongside the shift towards passive and alternatives, outcomes based solutions, and M&A between players,” added Moreau.

Campbell noted the link between technology and sustainability, where investors can increasingly keep a watch on greenwashing. Asset management culture therefore becomes increasingly important: “If your own people don’t believe in it, how can you expect customers to?”

Following that issue of customer expectations, Martin Parkes, Managing Director, Global Public Policy, BlackRock moderated a panel including Anna Lane, CEO, The Wisdom Council and Hugues Gillibert, CEO, Fitz Partners Ltd., on how well the UK fund industry has dealt with the requirement since 2019 to report if they offer value for money.

Lane, whose company tested value propositions earlier in 2021, said some reports clearly are better put together than others – consumers dislike industry shorthand or acronyms – echoed by Gillibert, whose company focuses on fund costs, noting that some companies saw the reports as a marketing exercise, leading to documents full of jargon.

“People are not stupid, but the industry has a tendency to overcomplicate things,” said Lane. “If doing things digitally, the competition might not be other asset managers, but Amazon. There is an 80% drop-off when people go to financial services websites in the UK.”

Europe could be set for more active ETFs following the shift towards ESG investing: “Accessing an ETF through the UCITS structure is more tax efficient than buying in the US because of the latter’s withholding tax regime, ” noted Fuhr.

For active managers wanting to keep their ‘secret sauce’, the latest evolution into non-transparent active ETFs may be attractive, albeit regulator concerns remain here, alongside concerns over crypto assets.

“An ETF does not give you wings – it is a wrapper. If it is bad, putting it into an ETF isn’t going to make it better,” said Shastry.

Crypto and other facets of digitalisation were confronted in the session on the role of FinTech involving Nasir Zubairi, CEO, Luxembourg House of Financial Technology (LHoFT) and Miranda Seath, Head of Market Insight, The Investment Association.

Witnessing growth in FinTech hubs across the UK, and an expansion of firms focused on the RegTech segment of FinTech in Luxembourg, Seath  argued that the industry still needs to become better at identifying the changes FinTech can support, but also not be afraid of failure.

“It doesn’t need to be a Big Bang. You can fail sometimes and learn from that. But the concept of failing is challenging to an industry that deals with risk.”

Advocating change, be it in encouraging sustainable investments or applying better data overlays and FinTech, could come to nothing without trust by end investors and regulators.

Touching on this, Dame Elizabeth Corley, DBE, Chairperson, Impact Investing Institute, recalled being told by the European Commissioner for Internal Market and Services in the period following the global financial crisis: “Madam, I can promise regulation, but I cannot promise good regulation”.

She stressed in her interview with Jamie Broderick, Advocate for social impact investment and board member, Impact Investing Institute, that this type of anecdote is worth remembering at a time when asset managers feel the returns of the past decade are down to their skill, but who now face a period of QE unwinding, amidst an unprecedented debt burden and an increasing need to adopt sustainability.

Thinking beyond carbon to communities, deforestation and biodiversity, she said: “It has to be a just transition or it will not hold”.

“Everybody in this room has the opportunity to impact the future. Find time every day to remember the purpose of what you are doing.”

Preparation work helped decide which categorisation to aim for, noted Simons, but the ongoing lack of data has meant “we are still not where we are going to be” said Preisler. Similarly, Hoeding reflected that the work of the EIF with investments into SMEs has also found relevant data generation from such entities to be more difficult.

In turn, this is causing some persistent uncertainty on how, say, a fund might ‘upgrade’ from Article 6 to 8. However, Hoeding suggested investors should remember that Article 8 and 9 are not better, but about different things, aiming to be enablers of sustainability outcomes.

ESG, renewables and recyclables may be a lot easier to implement faster in private than public companies, argued Nick Curwen, Managing Director, EQT Fund Management, taking part in the workshop on private assets.

That in turn suggests a new regulatory challenge, particularly in areas such as anti-money laundering, where there is an argument for a global standard to avoid European deal makers being undercut by US deal makers, who may be not subject to the same scrutiny.

The final workshop on governance highlighted the latest Luxembourg Fund Governance Survey, showing the growing importance of independent directors as well as the continued growth in the number of women directors in the alternatives and UCITS universe.

Presenting the findings, Andrea Montresori, Audit Asset & Wealth Management, Partner, PwC, noted independent directors are becoming increasingly important, because of the skills they bring such as knowledge of local regulations.

Similarly, Jasveer Singh, General Counsel, Jupiter Asset Management Limited, noted those in governance roles need to think about expectations of more regulatory divergence post Brexit for those working across multiple jurisdictions. And while a topic such as ESG is very prominent in the EU, it is less so in the US or Asia, also requiring thinking about differences in improving the governance framework, approach and application.

On the Luxembourg perspective, Dupin noted that the CSSF was indicating a desire for boards of funds to increasingly be able to show they understand their business, while Notter addressed the governance talent issue by noting that some five million people are within an hour’s commute of Luxembourg.