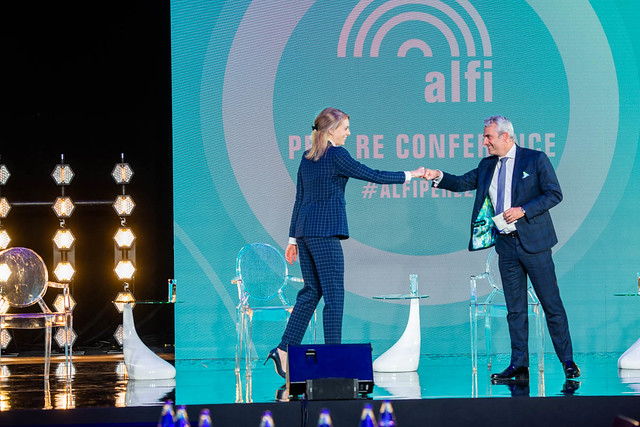 Luxembourg is continuing to enjoy strong growth in private assets amid ongoing low interest rates and decoupling of performance from public markets, according to ALFI Chair Corinne Lamesch, opening the fund industry association’s PE & RE Conference 2021 on November 30 and December 1. Since 2016 the sector’s assets under management has doubled, according to Preqin; the Grand Duchy has become Europe’s preferred jurisdiction among investors in private equity and private debt, and more than 240 managers of alternative funds are now active on the market.

The conference may have been required to adopt an all-virtual format in response to the evolution of the Covid-19 pandemic, but it nevertheless had more than 450 participants. This reflects the fact that the alternative fund sector has clearly gained further momentum over the past two years despite the various restrictions on face-to-face social interaction and physical movement. And as Ms Lamesch notes, it has underlined the “massive use” in particular of reserved alternative investment funds and special limited partnerships, two of the latest additions to Luxembourg’s toolbox for the alternative fund industry.

Meantime the regulatory landscape continues to evolve. In November the European Commission unveiled eagerly-awaited proposals for revision of the EU’s Alternative Investment Fund Managers Directive, introducing minor changes for requirements governing loan originating funds and the use of liquidity management tools, but, importantly for Luxembourg, avoiding major changes to the rules on delegation of functions to entities outside the EU.

Instead, Ms Lamesch noted: “The Commission found that properly-conducted delegation offers clear benefits to managers and investors.” It has also unveiled proposed changes to the European Long-Term Investment Fund regime, notably by easing access to ELTIFs – of which around half are domiciled in Luxembourg – to retail investors.

Over the past decade and a half, Luxembourg’s private equity sector has undergone an almost unimaginable transformation, says EY Partner Olivier Coekelbergs, with an explosion not only in the volume of funds and assets but the establishment of many general partners in the Grand Duchy. The resilience of the sector’s ecosystem has been demonstrated by its ability to adapt to pandemic constraints, often through technology enabling a sector that has always prized in-person contact to accommodate the need for remote connection.

One theme raised by ALFI PE & RE panellists on trends in the private equity sector is exasperation with the public focus on ‘ESG’ in the investment industry. Claus Mansfeldt, Chairman of Munich-headquartered Swancap and President of the Luxembourg Private Equity & Venture Capital Association, says the term acts as a smokescreen for greenwashing and questions the value to the environment of grandstanding on decarbonisation commitments.

Other speakers pointed to the industry’s quiet contribution in recent years toward realisation of the United Nations’ Sustainable Development Goals. Argued Hind El Gaidi, Head of Marketing and Financial Information at France’s Astorg: “ESG is not something that should need to be proclaimed – it ought to be embedded in our business model.”

The emergence of Luxembourg as a leading private equity hub over the past two decades has represented an important evolution of the country’s financial industry, said Philipp von Restorff, Deputy CEO of Luxembourg for Finance. He argues that the country has a range of advantages over competitors, including its multinational character, easy access not only to regulators but industry peers, and the development of a fintech sector focused on the needs of the financial ecosystem.

However, as in other jurisdictions its growth entails a constant effort to attract new talent, both through the domestic education system and recruitment from abroad. Maximising the available resources requires attention to diversity and inclusion, notes Rajaa Mekouar, Founder and CEO of Calista Direct Investors, who says it is increasingly critical for long-term success – including attracting younger people to the industry as well as boosting the emotional intelligence of managers. Ms Mekouar says she was particularly struck by a question from one interview candidate: “How much empathy is there in your team?”

Luxembourg has been in the forefront of the emergence of private debt as an increasingly important asset class in the past decade since the global financial crisis led to more stringent prudential rules that curbed bank lending. The latest private debt fund survey conducted by KPMG in partnership with ALFI has reported that the sector’s assets under management grew by 40.6% to €181.7bn over the 12 months to the end of June, according to KPMG Partner Christophe Diricks.

The report also identifies increasing use of structures other than regulated funds and in particular RAIFs, whose share of the total has grown by 16% in a year to more than one-third of the total, but more than 88% of respondents opted for special limited partnerships; ESG criteria are an increasingly important factor in private debt, with 33% claiming sustainability characteristics to be classified under Article 8 of the EU’s Sustainable Finance Disclosure Regulation, plus 6% possessing a sustainability purpose under Article 9; and 72% of funds are active in direct lending, with 45% originating loans and 55% participating in the secondary market.

Credit Ares Management Principal Hilary Fitzgibbon says the growth of the sector is set to continue as more European markets open up to direct lending and companies become more comfortable with the concept, appreciating its flexibility in aspects such as types of loan and covenants. “Sourcing deals is not a problem, just separating the wheat and the chaff,” she said.

Francesco Battazzi, Head of Diversified Funds at the European Investment Fund told conference participants: “Luxembourg has become the country of choice for larger funds targeting international investors. Smaller firms may initially focus on their own countries, but they will look to Luxembourg as they seek to attract a broader investor base.”

Real estate funds have been longer established in Luxembourg but are also enjoying a strong growth trajectory, according to ALFI PE & RE speakers, despite a different impact from the pandemic; retail properties have suffered while logistics facilities are in greater demand than ever. And with building accounting for as much as 40% of greenhouse gas emissions in Europe, sustainability is a major factor both in acquisitions and the management of existing assets.

The assets of Luxembourg real estate funds rose by nearly 15% to €104.4bn over the 12 months to the end of September, according to an ALFI report, with the number of funds surveyed increasing by 69 to 518, with 36 of the new vehicles taking the form of RAIFs. Deloitte Partner Francisco da Cunha, who headed the survey working group, reported that despite the inherent illiquidity of the asset class, only 1% of funds had to resort to liquidity management tools; just two vehicles had to suspend redemptions temporarily, and only 3% reported large redemptions.

Funds have also been beneficiaries of a pullback by banks from lending to the real estate sector in recent years, in part driven by Basel II capital requirements, says Henri Vuong, Head of Real Estate Debt Investment Research at PGIM, noting that debt funds are also more flexible on loan ticket size.

The pandemic period has also opened the door to increased opportunities in infrastructure investment, says Mark Chladek, Transaction Managing Director at Infracapital, part of the UK-based M&G group. “The past year has seen an increased focus on connectivity including optic fibre, and the energy transition, involving storage technology and customer solutions such as heat pumps,” he said. “The sector is not recycling old assets but investing in new ones.”

In the space of little more than a decade, sustainability has moved to the heart of the investing process, according to Peter Branner, CIO of Dutch Pension Group APG and Vice-President of EFAMA. “In 2008 ESG was taken into account primarily through exclusion, and was a side-track to normal risk and return considerations,” he said. “By 2015 it was being integrated into investment decisions for all asset classes.”

In the wake of the COP26 climate conference in Glasgow, the financial industry is now called upon to play a more active role in the process of decarbonisation and the pursuit of sustainability in all its aspects. But members of the alternative investment industry in Luxembourg and beyond say they are building on well-developed existing foundations.

Thank you to our sponsors, partners and exhibitors